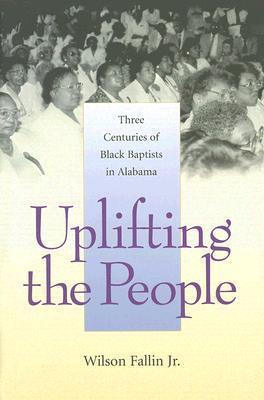 The denomination emphasizes a conversion experience that brings salvation, spiritual freedom, love, joy, and patience, and also stresses liberation from slavery and oppression and highlights the exodus experience. In examining the social and theological development of the Afro-Baptist faith over the course of three centuries, Uplifting the People demonstrates how black Baptists in Alabama used faith to cope with hostility and repression. Fallin reveals that black Baptist churches were far more than places of worship.

They functioned as self-help institutions within black communities and served as gathering places for social clubs, benevolent organizations, and political meetings. Church leaders did more than conduct services- they protested segregation and disfranchisement, founded and operated schools, and provided community leaders for the civil rights movement of the mid-20th century. Through black churches, members built banking systems, insurance companies, and welfare structures.

Since the gains of the civil rights era, black Baptists have worked to maintain the accomplishments of that struggle, church leaders continue to speak for social justice and the rights of the poor, and churches now house day care and Head Start programs. Uplifting the People also explores the role of women, the relations between black and white Baptists, and class formation within the black church.

Comments
Comments for "Uplifting the People: Three Centuries of Black Baptists in Alabama":